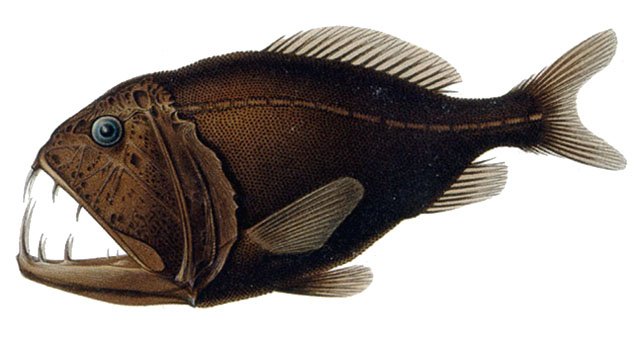 The Fangtooth isn't known for its dashing looks, and has come to be known as the 'Ogrefish'. Resembling a beast from a horror movie with teeth as large as its head, this fish found in both tropical and cold waters throughout the world. It has no known close relatives, often hunting down its prey on its own, relying on luck and not tactics to find its prey, opening its mouth and sucking in its passing-by meals. Fangtooth fish are found in two species - the Common Fangtooth and the Shorthorn, growing to jus six and three inches respectively, So they are in fact harmless to humans, and it may give you food for thought that they are the prey of tuna and marlin fish.

The head of the Fangtooth is disproportionately large, covered in mucus cavities and thin skin.

I want one as a pet!

Well, you'll need either a submarine or a very long fishing rod as the Fangtooth is the deepest living fish known to Man. During the day, these fish reside around five kilometers beneath the surface of the sea though are often found below the 200 meter mark, rising at night to find food. Because of its fetish for deep waters that humans are incapable of reaching using conventional methods, the Fangtooth is capable of being compressed to frightening degrees.

A photograph of the Fangtooth, teeth and all, can be found at http://www.amonline.net.au/fishes/fishfacts/fish/acornuta4.htm

Journey to a past life with this Hypnotic World self hypnosis CD. Details...

Add your horoscope to your personal Google page

Fun, informative and free! Add an eMystica horoscope to your iGoogle page with our free gadget. Simply select your star sign and click Go: